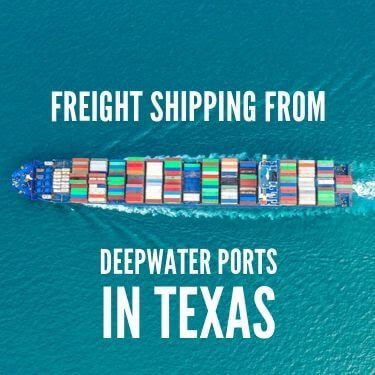 Freight shipping in the Lone Star State is big business and it's getting bigger. There are 12 deepwater ports in Texas that allow all kinds of movement. Check out the recent upgrades to the Port of Houston and others.

Shipping ports in Texas have been updated to receive vessels needing deepwater ports. These highly competitive structures are frequently used in the foreign and domestic trade industry. Deepwater ports are often used to transport oil and natural gas in ships needing 30 feet or more of depth. However, a variety of other products are shipped from these ports every day.

See how recent updates have created further opportunities for domestic and international shippers in the U.S. at deepwater ports in Texas.

Table Of Contents
Looking for a solution to move truckload freight? R+L Global Logistics handles truckload shipping. Let us know when and we'll handle the rest.
Get My Freight Quote Now >

Ports along the United States’ Gulf Coast are benefiting from the influx of vessels that have been diverted away from West Coast ports in the San Pedro harbors of California due to the Covid-19 pandemic that began in 2020. Numerous trade disruptions and labor difficulties created bottlenecks in deliveries and unloading. At one point, over 100 ships were drifting off the California coast waiting for a chance to unload.

Texas deepwater ports, along with others in the Gulf region, are now expanding to accommodate the overflow. Its believed these expansions will create millions more job opportunities and boost the economic activity of the area.

In the last two years, the ports of Houston, Beaumont, and Corpus Christi have set new records for volume handled. Records indicate that over $240 billion in trade value is handled in this region between imports and exports. Multiple plans are in place to continue expanding and upgrading these increasingly vital ports.

Expansion efforts began in early 2021 to expand the Houston Ship Channel to accommodate the two-way traffic of large ships carrying liquid bulk material and container ships. Stretching along 25 miles of the channel, the port has more than 200 private terminals and eight public ones. In 2021, these handled 52 million tons worth of waterborne tonnage.

Earlier expansions have made Houston the national leader in break bulk and oversized cargo handling. Both Houston and nearby Port Freeport have container cranes able to handle Post-Panamax ships and the necessary port depths. Houston is now the largest container port on the Gulf, handling 3.5 million TEUs in 2021 alone, and is on track to do even more in 2022.

If you need to move out-of-gauge cargo, USA Truckload is an industry leader that can provide drayage services and heavy haul trucking services in and out of the region.

Construction is currently underway to complete a multi-modal terminal and add additional berths. This will allow the port to expand its intermodal services and improve the rate at which cargo can leave the port. Corpus Christi is also next in terms of depth improvements.

Dredging efforts should begin that expand the current port depth from 44 feet to 54 feet. Larger vessels will be able to come in safely throughout the year with such expansions.

What is a Deep Water Port?

Ports are designed to allow vessels a place to park and either receive freight or unload their current cargo before moving on to the next destination. A deepwater port is made for larger, heavier boats to dock and unload. Standard seaports generally have a depth of 20 feet and can be used for recreational purposes, while deepwater ports are built-in about 30-foot depths or more and are primarily used for consignments.

Deepwater ports are also known for their ability to dock fully loaded Panamax ships. These boats are designed to transport everything from massive portions of oil, to upwards of 12,000 TEUs (twenty-foot equivalent units) of various goods. The port includes all related elements: pipeline, service facilities, mooring buoys, and pumping posts.

As ships have increased in size, now referred to as Post-Panamax or Super Panamax, ports have been dredged to depths of over 50 feet. This has also been done so ships can be accommodated during both high and low tide.

Environmentalists are concerned about the effects that importing and exporting natural gas and crude oil could have on the ocean. In an effort to reduce some of this fear, the Deepwater Port Act of 1974 was established. The act created a licensing program for any ports built beyond United States sea territory. The construction and ownership are monitored by the Maritime Administration which partners with multiple entities, including the Army Corps of Engineers, to ensure marine life is protected under all circumstances.

In order to be approved for one of these licenses applicants must:

Advanced technology is installed with the construction of a new deepwater port to assist with the supervision of oil spills, and monitor potential dangers from waves, weather, and wind.

How Many Ports are in Texas?

Seaports add a tremendous value to Texas’s economy. With the help of the Texas Freight Advisory Committee, the transportation industry is expected to grow. Texas waterways should see a continuous increase in traffic enabled by the expansion of the Panama Canal.

Texas ports have been remarkably successful over the years.

Along with the Texas Freight Advisory Committee, the MARAD helps to monitor ports across the state of Texas ensuring it is pushing to break even more records in the future. MARAD advises the use of the Gulf Intracoastal Waterway for efficient transportation through the state.

What Ports are in Texas?

There are a total of twelve ports throughout the state of Texas, ten of those ports are ranked in the U.S. top 100 list for the most tonnage. Each port handles a significant portion of domestic and foreign trade.

Some of the top producing are:

Port of Houston: This port is the largest in the state, operating along the Houston Ship Channel. Multiple companies have constructed buildings alongside the terminal, including petroleum businesses attempting to escape storms from the Gulf of Mexico.

Shipping in or around Houston? Find out how to get the best Houston freight shipping rates.

Port of Beaumont: The fourth-busiest port in the United States, located in Beaumont by the Neches River. With a high-capacity grain elevator, this terminal exports many bulk grains. This port has railway, highway, and ocean access.

Port of Corpus Christi: Located on Corpus Christi Bay, this 45-foot deepwater port was constructed after a devastating hurricane in 1919. Although this port is located within Texas borders, it is funded by the city rather than the state. The need for oil and gas during a weather emergency was recognized by the city officials, who continue to support this port today.

Port of Texas City: Opened in 1893 as one of the most popular deepwater ports in the state, supporting three other ports. However, in 1947 it was blown to pieces when a docked ship caught fire and exploded. The city made it a priority to rebuild and it was quickly re-opened and remains one of the most reliable ports.

Port of Port Arthur: Opening in 2000, this port is one of the newest. It is completely up to MARAD standards. However, in 2010 the channel leading to this port was drenched with oil after a tanker collided with another ship spilling over 400 thousand gallons of oil. Since that date, the channel has been cleared and the port is operating effectively.

Port of Galveston: Close to Galveston Island and the Gulf coast, this deep water port has been successful since its initial construction in 1825. In the early 19th century this port was the second busiest in the entire nation. Today, the port handles a variety of cargo and is one of the top ten terminals for cruise lines.

What is the Largest Shipping Port in Texas?

The port of Houston is not only the largest port in Texas but also one of the largest in the nation. The 25-mile wide port began within Houston’s limits but has since expanded to support private and public facilities. The annual income of this port averages 168 million dollars moving about  212 million tons of cargo.

The port has two different terminals, one of which is stationed in Morgan’s Point and Bayport. This location does not allow recreational uses in exchange, the port authority offers 90-minute tours to view trading operations. As of October 2019, the port was undergoing renovations, expected to be completed in 2020.

Houston is a leading point for international trade, handling  31% of European exports and 22% of Latin American exports.

Deepwater shipping ports in Texas are gateways for importing and exporting freight across the nation, and their success continues to grow. If you and your business are looking to take part in this growing industry but aren’t sure how to access deepwater ports in Texas, contact USA Truckload Shipping, powered by R+L Global Logistics today and speak with our qualified representatives.

Your freight is our number one priority. If you need to arrange transport services to or from an ocean port, we are on hand to find you the best solutions.  Trust the company with a 99.5 percent on-time delivery rate across the industry.

When you need to ship freight from or to Texas, or anywhere else in the world, we're up to the task. Call us at (866) 353-7178 today to get in touch with us and receive your freight rate quote!