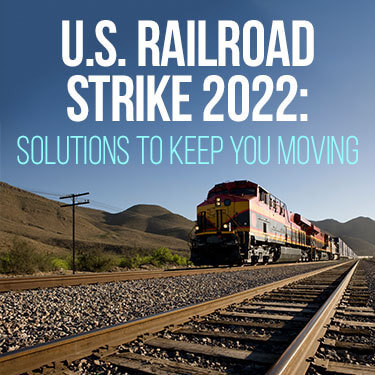 Last Modified: September 16, 2022
The threat of a US railroad strike might have you scrambling. See what’s behind the situation and how you can prepare to keep goods moving.

The American railroad system has a proud history in the United States. Once a symbol of ingenuity and strength, the railroad industry has struggled in recent decades to meet rising economic demands and retain qualified railroad workers.

After scaling back or completely stopping some rail services in preparation for a strike, an initial agreement was reached. While we seem to have avoided a nationwide strike by railroad union workers right now, this potential crisis has highlighted how fragile our current supply chain status remains.

A final ratification vote still needs to pass, but economists are sighing in relief that a major transport crisis is no longer an immediate danger. With supply chains still normalizing after major disruptions during the Covid-19 pandemic, a railroad strike had the potential to create major issues.

Freight rail moves over 30% of goods in the U.S. according to the Bureau of Transportation Statistics (BTS). At a minimum, a strike in September would have impacted the agricultural industry’s fall harvest season and affected the availability of many consumer goods.

Has the threat of a rail strike gone away completely? How do suppliers manage in the event of a work stoppage? Is there anything shippers can do to prepare for a full strike?

We are here to answer these questions and provide you with some practical solutions to protect your supply chain.

Are Railroad Workers Going on Strike?

The rail industry has taken some hits in recent decades, many of which have affected rail workers directly.

According to most sources, working conditions and compensation were harsh enough to cost the industry about 40,000 workers between 2018 and 2020. Some of this was due to cuts made by the companies themselves due to lower volumes of freight. Others were due to a practice called PSR (precision scheduled railroading).

Many companies adopted PSR practices as a way of making rail more efficient by focusing on high-volume lanes and cutting back on or eliminating less efficient routes. However, the practice has also led to fewer available routes and worker layoffs.

Long-standing concerns from workers at all levels of the industry included:

However, when the Covid-19 pandemic hit, railroad carriers saw increased business as shipping habits began to change. When the two biggest rail companies reported record profits at the end of 2021, it seemed workers had enough.

The unions brought some of the following demands to each major rail company.

The first deal presented by the freight companies in August used recommendations from the Presidential Emergency Board (PEB) and was rejected outright. A strike was called for and was set to take place Friday, September 17 at 12:01 AM.

Under pressure by the Biden administration to reach an agreement before the pre-set “cooling off” period expired, another deal was made in discussions brokered by Biden’s appointed Labor Secretary.

After the last two unions holding out against the companies accepted this latest tentative agreement, a ratification process began.

Officially, the strike has been delayed until September 29, 2022. Individuals and companies on both sides are hoping for a resolution that meets everyone’s needs and prevents such an event entirely.

Would the Railroad Strike Affect All Train Lines?

The original call to strike came from unions representing workers at freight rail lines, not passenger lines. However, most passenger trains still travel on tracks maintained by freight rail companies.

The close connections between unions and the various parts of the rail industry mean a strike at even one rail company, or by members of just one union, can affect most of the system.

For example, Amtrak, a major passenger line, was preparing to shut down because 97% of its trains run on freight-owned lines.

BNSF Railway, which is owned by Berkshire Hathaway Inc., and Union Pacific account for about 44% of rail workers in the industry. These two companies move millions of dollars worth of goods on a daily basis.

There were 12 unions involved in negotiations, but a holdout from two of the largest was initially delaying the tentative agreement. These two, the International Association of Sheet Metal, Air, Rail, and Transportation Workers (SMART-TD) and the Brotherhood of Locomotive Engineers and Trainmen (BLET), represent members in almost every major rail company.

In the end, even a small strike could affect all or most train lines.

What Could the Railroad Strike Affect?

Economically speaking, a major stoppage of long-distance rail service impacts all levels of the national supply chain. The last railroad strike that took place 30 years ago only lasted two days and was carried out by only one rail line. Even so, an article from the Washington Post reported that it costs the nation nearly $1 billion a day in lost wages and products.

In current times and with a nation already dealing with transportation delays, a multi-rail shutdown could cost the American economy upwards of $2 billion a day - as a start.

Some industries would be impacted more immediately than others.

Shippers in all industries have every right to worry about how their business could be affected. The trickle-down effect of a strike could have lasting effects. The American Association of Railroads tracks weekly, monthly, and annual movement of commodities moved by rail throughout the U.S., Mexico, and Canada.

One look at their numbers reveals just how much of an impact a work stoppage or delay could mean for these industries.

Major Commodities Moved By Class I Railroads in 2021

Some businesses were dealing with just the effects of a proposed strike. For example, freight lines that moved HAZMAT materials stopped accepting packages and others refused to pick up containers from ports. While these activities have now been resumed, even those delays created backlogs in many chemical plants and ports.

While no solution is perfect, there are some practical steps you can take to prepare for a labor strike or any other event that impacts rail and its role in the supply chain.

If trains stopped working tomorrow or a year from now, would you have a plan for moving forward? If we’ve learned nothing else in the logistics industry in the last two and half years, it’s that you should never count on just one form of shipping.

At USA Truckload Shipping, we’ve come to realize that our clients need practical solutions to address ongoing concerns. There will always be threats to the supply chain. If it isn’t a railroad strike or a global pandemic, it could be severe weather or some as-yet unforeseen disaster.

We’ve worked hard to make sure clients have access to more than just a shipping contingency bandage - we offer practical solutions that you can adopt and embrace long-term.

Even as other companies have reduced or cut services, we are moving forward with expansion plans around the country to better serve you.

Our network of carriers comes from all parts of the country and we’ve made it a goal to keep expanding and add even more line haul capacity.

Just take a look at some of the latest developments:

Losing out on a rail service doesn’t have to mean the end of your business. Branching out to take advantage of opportunities in trucking services now might help you avoid setbacks later on.

Clients come to us with a variety of goods they need to ship all across the country. From high-value electronics to imported Italian tile, our drivers have seen it and hauled it.

To make sure there is nothing drivers can’t handle, we make sure each one is also HAZMAT certified.

These included crucial products, such as chemicals for water purification and fertilizers for the agricultural industry.

Hazardous materials are necessary for many things, but transporting them comes with various rules and regulations.

If you have hazardous materials that are stuck en route, you need the services of an experienced company that has drivers where you need them and who are capable of hauling a variety of materials.

Railways do offer crucial services. There is a reason that over 30% of U.S. freight relies on the railroad. At the end of the day though, trains just can’t go everywhere that a truck can.

The versatility of truckload services means that we can provide a service for almost every shipping need.

As a country, we may have once taken for granted our ability to keep goods on store shelves and supplies in motion. At USA Truckload Shipping we know that not every situation can be planned for, but it doesn’t stop us from trying.

Your shipments matter to you and they matter to our economy at large. No matter what happens with U.S. railroad services, you need solutions you can rely on now and going into the future.

The freight industry and its workers are the real backbone of the supply industry. They should be well compensated and treated well. Unfortunately, sometimes that takes extreme action.

Strikes of railroad workers, or any supply chain employment sector, can impact all of us, but especially shippers. Plan ahead for the expected and the unexpected by relying on a service you can count on.

USA Truckload Services believes in providing the best quality services to our clients each and every time. We’ll talk with you about your personal or business shipping needs.

Call us today at (866) 353-7178 to speak with an experienced representative who wants to help get your shipment to where it does the most good. Already know what you need moved? Fill out an online form and request a quote now.

Looking for a solution to move truckload freight? R+L Global Logistics handles truckload shipping. Let us know when and we'll handle the rest.
Get My Freight Quote Now >
Share This Article